February 15, 2020 - XR Rochester and Allies Perform Traffic Swarm in front of Chase Bank in Solidarity with the Wet'suwet'en

This past Saturday, on February 15, 2020, Extinction Rebellion (XR) Rochester and its regional allies joined thousands of activists across the world answering the international call for solidarity from the Wet'suwet'en people, who are facing an illegal takeover of their sovereign land for the construction of a fracked gas pipeline. Last week, the Royal Canadian Mounted Police began raids to evict the Wet'suwet'en from their territory in open violation of Wet’suwet’en, Canadian, and international law.

Saturday morning, around 50 activists gathered in a corner of Washington Square Park, where they heard indigenous activist Ronald Garrow read a call to action by Mohawk Clan Mother Louise Bear and Councilwoman Mary Lupien call for climate reforms in the city of Rochester. Activists with decades of experience in nonviolent direct action spoke from a megaphone in the bitter cold.

After the rally, the group of activists marched a mile to Chase Bank at 560 Monroe Ave, where they carried out “traffic swarms” – intermittent blocking of traffic for two cycles at a time – in order to bring disruption in front of the bank. JP Morgan Chase is the largest funder of fossil fuel extraction and exploration, and they are the primary financier of the TransCanada pipeline (officially known as TC Energy's Coastal Gaslink Pipeline) that is currently responsible for the forceful eviction of the Wet’suwet’en people from their land. Slogans like "Climate change is not convenient," "First Nations come first," and "No more gas, no more oil! Leave the carbon in the soil!" could be heard from blocks away. “Food Not Bombs” brought coffee to protesters and some unaffiliated pedestrians joined in the protest. Volunteers from the National Lawyers Guild acted as impartial legal observers. While Rochester PD arrived at the scene, no arrests were made during the demonstration.

All across the world activists have been protesting with civil disobedience, costing the Canadian government millions of dollars by blocking intersections for days, railways, and ports. Closer to upstate NY, activists from XR Ithaca occupied a Chase Bank branch in Ithaca on February 13, United Nations Global Divestment Day. Dozens of arrests were made, and the bank was forced to close in this highly successful action.

As Extinction Rebellion, allies, and activists around the world continue the fight for climate justice and a just transition that prioritizes the most vulnerable people and indigenous sovereignty, we are reminded by the haunting words of an anonymous Land Defender:

"We are here for humanity, for life, we are unarmed, we are peaceful. You are killers, you are genocidal maniacs, you have your guns pointed at us."

XR Rochester would like to thank the cosponsors of Saturday’s action: The Flying Squirrel Community Space, Metro Justice, theRochester Rapid Response Network, and the Worker Justice Center of New York. Thanks to Food not Bombs for hot coffee, and to Cuse Action Medics for serving as medics and marshals.

Extinction Rebellion is a global nonviolent movement to compel the world’s governments to address the climate and ecological emergency. We demand that the Government: "Tell the truth" by declaring a climate and ecological emergency; act now to halt biodiversity loss and reduce greenhouse gas emissions to net zero by 2025; create and be led by the decisions of a Citizens' Assembly on climate and ecological justice; and we demand a just transition that prioritizes the most vulnerable people, establishes indigenous sovereignty, and establishes legal rights for ecosystems in order to maintain a livable, just planet for all. We welcome anyone interested to join us today!

On December 8, 2019, XR Rochester hosted a public talk on the global climate crisis, featuring speakers from XR Southern Vermont, in the Carriage House of the Rochester Zen Center, located at 5 Arnold Park. During the lecture, featured speakers Ward and Maria Ogden from XR SVT briefed the audience on the urgency of taking immediate action on the climate crisis, and why we cannot wait any longer.

On the morning of Black Friday, as Rochester’s anxious shoppers made a beeline to shopping malls and Best Buy’s around town, Extinction Rebellion (XR) Rochester also rose early – around 4:00 AM on November 29, rebels from XR Rochester hung large banners at four different overpasses along Interstates 490 and 390, as well as an overpass near Eastview Mall. The banners exclaimed, in large, block letters, messages like “Climate Crisis – Action Now,” and “Tell the Truth,” referring to the group’s demands that the Government declare a climate emergency and speak truth about the catastrophic consequences of inaction on the Climate and Ecological Emergency.

“We are facing an unprecedented global emergency. The government has failed to protect us. To survive it’s going to take everything we’ve got.” (XR Global). Extinction Rebellion, which was founded in the UK but has since grown to hundreds of chapters around the world, embraces non-violent direct action, civil disobedience, and other tactics to peacefully advocate four Demands, which aim to save humanity from extinction. As said in the quote above, our government has failed us. We must now take matters into our own hands and fight for our right to live.

This action may seem small, but hundreds of thousands of people have driven under the banners this week. In just a few days on Sunday, December 8, from 5-7pm, XR Rochester will be holding a conference on “Heading for Extinction (and What to Do About It).” This free event will be held in the Carriage House at the Rochester Zen Center, located at 5 Arnold Park, Rochester, NY. We encourage any and all people interested to attend.

The locations of the banner drops consi¬sted of overpasses along 490 and Clinton Avenue, 490 and Culver Road, 390 and Kendrick Road, and an unknown overpass towards Eastview Mall. At these locations each “drop team” performed a banner drop, securely tying the banners on the side of each overpass for oncoming traffic to see. These banners read “Tell the truth”, “Climate Crisis”, and “Climate crisis – action now.” These banners were strategically placed at presumably high traffic areas due to black Friday being later that day.

See press coverage in The Banner 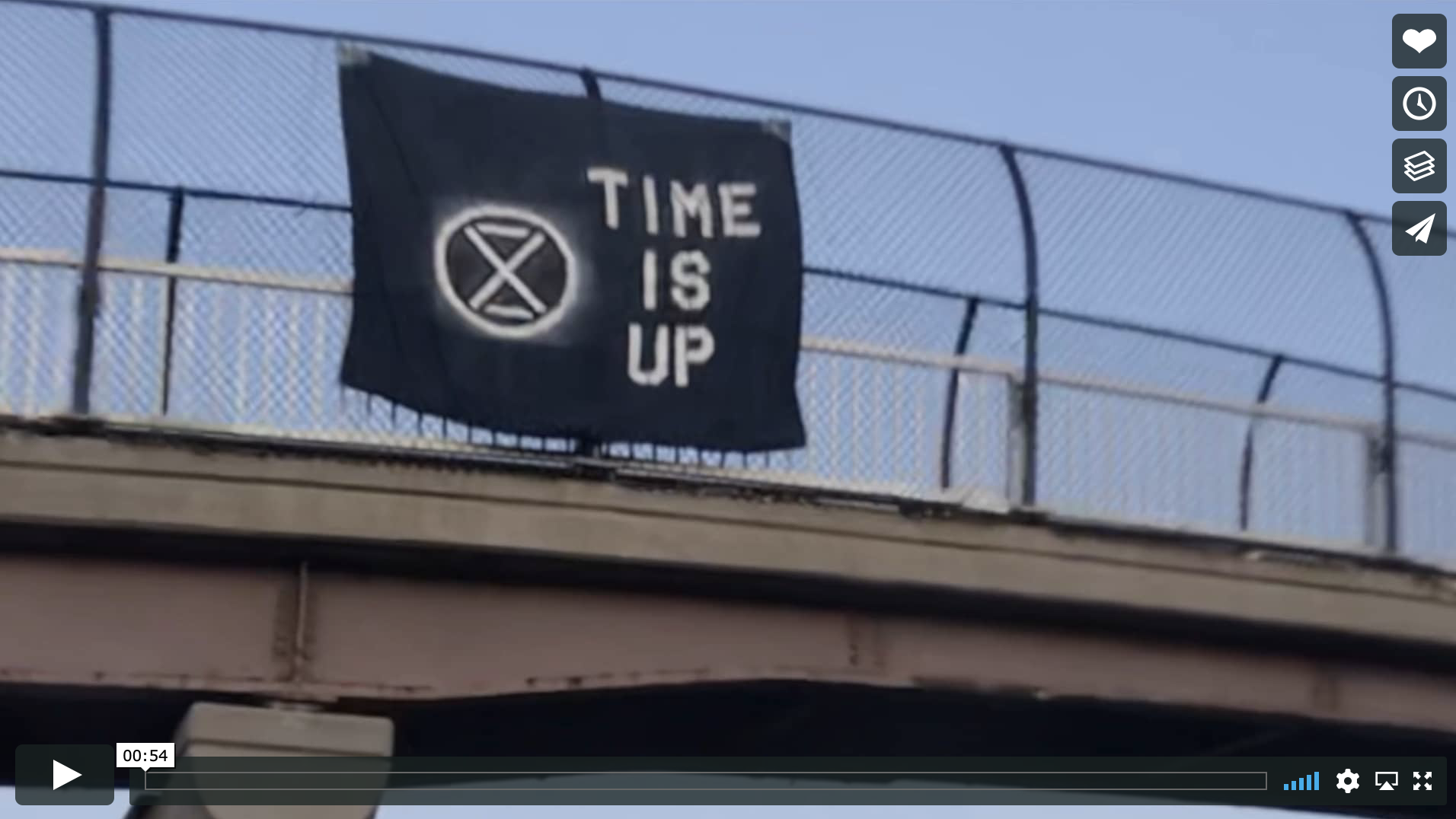